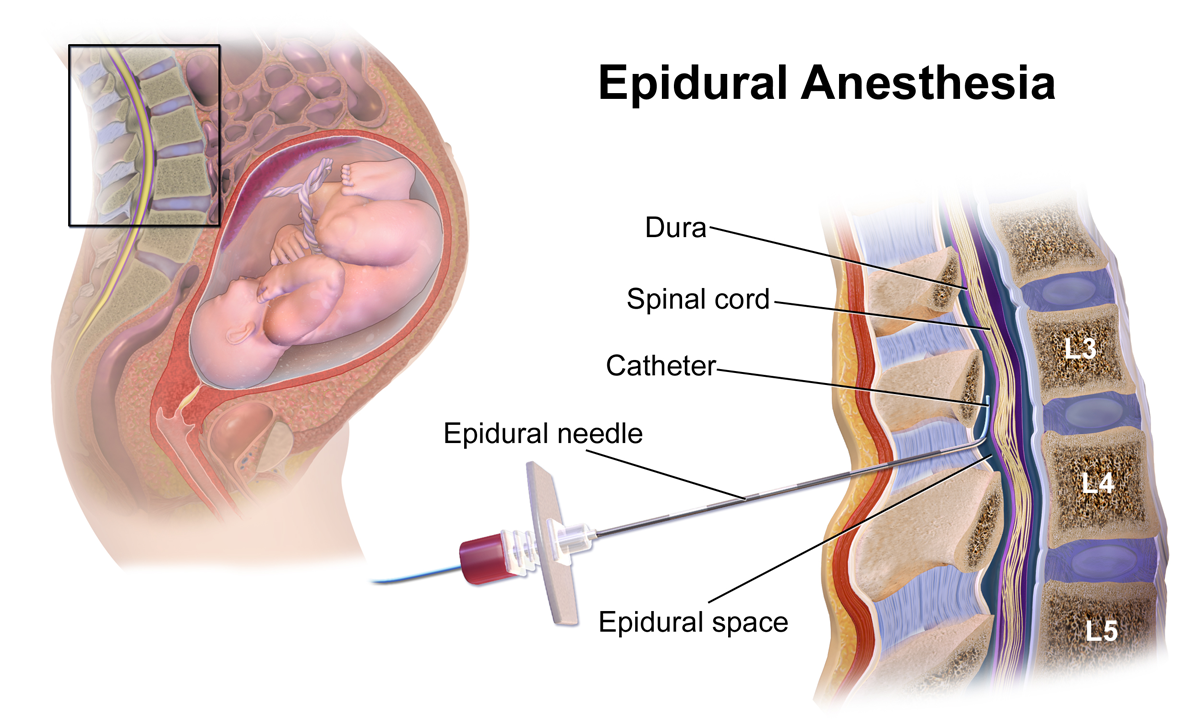 The excerpt from this article was originally published by Dr. Sarah J. Buckley in 2005 at www.sarahbuckley.com | Previously published in Mothering No.133, Nov-Dec 2005, as “The Hidden Risks of Epidurals” 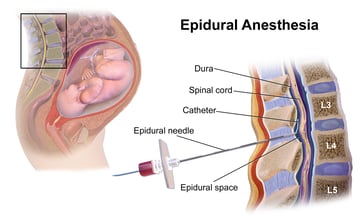 The first recorded use of an epidural was in 1885, when New York neurologist J. Leonard Corning injected cocaine into the back of a patient suffering from “spinal weakness and seminal incontinence.” More than a century later, epidurals have become the most popular method of analgesia, or pain relief, in US birth rooms. In 2004, almost two-thirds of laboring women reported that they were administered an epidural, including 59 percent of women who had a vaginal birth. In Canada, around half of women who birthed vaginally used an epidural, and in the UK, 21 percent of women had an epidural before delivery.

Epidurals involve the injection of a local anesthetic drug (derived from cocaine) into the epidural space—the space around (epi) the tough coverings (dura) that protect the spinal cord. A conventional epidural will numb (block) both the sensory and motor nerves as they exit from the spinal cord, giving very effective pain relief for labor but making the recipient unable to move the lower part of her body. In the last five to ten years, epidurals have been developed with lower concentrations of local anesthetic drugs, and with combinations of local anesthetics and opiate pain killers (drugs similar to morphine and meperidine) to reduce the motor block, and to produce a so-called “walking” epidural.

Spinal analgesia has also been increasingly used in labor to reduce the motor block. Spinals involve drugs injected right through the dura and into the spinal (intrathecal) space, and produce only short-term analgesia. To prolong the pain-relieving effect for labor, epidurals are now being co-administered with spinals, as a combined spinal epidural (CSE).

Epidurals significantly interfere with some of the major hormones of labor and birth, which may explain their negative effect on the processes of labor.6 As the World Health Organization comments, “epidural analgesia is one of the most striking examples of the medicalization of normal birth, transforming a physiological event into a medical procedure.”

For example, oxytocin, known as the hormone of love, is also a natural uterotonic—a substance that causes a woman’s uterus to contract in labor. Epidurals lower the mother’s production of oxytocin, or stop its normal rise during labor. The effect of spinals on oxytocin release is even more marked. Epidurals also obliterate the maternal oxytocin peak that occurs at birth —the highest of a mother’s lifetime—which catalyses the final powerful contractions of labor and helps mother and baby to fall in love at first meeting. Another important uterotonic hormone, prostaglandin F2 alpha, is also reduced in women using an epidural.

Beta-endorphins are the stress hormones that build up in a natural labor to help the laboring woman to transcend pain. Beta-endorphins are also associated with the altered state of consciousness that is normal in labor. Being “on another planet,” as some describe it, helps the mother-to-be to work instinctively with her body and her baby, often using movement and sounds. Epidurals reduce the laboring woman’s release of beta-endorphins. Perhaps the widespread use of epidurals reflects our difficulty with supporting women in this altered state, and our cultural preference for laboring woman to be quiet and acquiescent.

Adrenaline and noradrenaline (epinephrine and norepinephrine, collectively known as catecholamines, or CAs) are also released under stressful conditions, and levels naturally increase during an unmedicated labor. At the end of an undisturbed labor, a natural surge in these hormones gives the mother the energy to push her baby out, and makes her excited and fully alert at first meeting with her baby. This is known as the fetal ejection reflex.

However, labor is inhibited by very high CA levels, which may be released when the laboring woman feels hungry, cold, fearful, or unsafe.17 This makes evolutionary sense: If the mother senses danger, her hormones will slow or stop labor and give her the time to flee to find a safer place to birth.

Epidurals reduce the laboring woman’s release of CAs, which may be helpful if high levels are inhibiting her labor. However, a reduction in the final CA surge may contribute to the difficulty that women laboring with an epidural can experience in pushing out their babies, and the increased risk of instrumental delivery (forceps and vacuum) that accompanies the use of an epidural (see below).

Effects on the process of labor

Epidurals slow labor, possibly through the above effects on the laboring woman’s oxytocin release, although there is also evidence from animal research that the local anesthetics used in epidurals may inhibit contractions by directly affecting the muscle of the uterus.18

For example, an epidural also paralyses the laboring woman’s pelvic floor muscles, which are important in guiding her baby’s head into a good position for birth. When an epidural is in place, the baby is four times more likely to be persistently posterior (POP or face up) in the final stages of labor—in one study, 13 percent compared to 3 percent for women without an epidural. A POP position decreases the chance of a spontaneous vaginal delivery (SVD). In one study, only 26 percent of first-time mothers (and 57 percent of experienced mothers) with POP babies experienced a SVD; the remaining mothers had an instrumental birth (forceps or vacuum) or a cesarean.

For the baby, instrumental delivery can increase the short-term risks of bruising, facial injury, displacement of the skull bones, and cephalohematoma (blood clot under the scalp). The risk of intracranial hemorrhage (bleeding inside the brain) was increased in one study by more than four times for babies born by forceps compared to spontaneous birth, although two studies showed no detectable developmental differences for forceps-born children at five years old. Another study showed that when women with an epidural had a forceps delivery, the force used by the clinician to deliver the baby was almost twice the force used when an epidural was not in place.

Epidurals also increase the need for synthetic oxytocin (Syntocinin, Pitocin) to augment labor, due to the negative effect on the laboring woman’s own release of oxytocin. Women laboring with an epidural in place are almost three times more likely to be administered Pitocin. The combination of epidurals and Pitocin, both of which can cause abnormalities in the fetal heart rate (FHR) that indicate fetal distress, markedly increases the risk of operative delivery (forceps, vacuum, or cesarean delivery). In one Australian survey, about half of first-time mothers who were administered both an epidural and Pitocin had an operative delivery.

The impact of epidurals on the risk of cesarean is controversial; differing recent reviews suggest no increased risk and an increase in risk of 50 percent. The risk is probably most significant for women having an epidural with their first baby.

Note that the studies used to arrive at these conclusions are mostly randomized controlled trials in which the women who agree to participate are randomly assigned to either epidural or non-epidural pain relief. Non-epidural pain relief usually involves the adminstration of opiates such as meperidine (pethidine). Many of these studies are flawed from high rates of crossover—women who were assigned to nonepidurals but who ultimately did have epidurals, and vice versa. Also, note that there are no true controls—that is, women who are not using any form of pain relief—these studies cannot tell us  about the impact of epidurals compared to birth without analgesic drugs.

Epidural techniques and side effects

The drugs used in labor epidurals are powerful enough to numb, and usually paralyze, the mother’s lower body, so it is not surprising that there can be significant side effects for mother and baby. These range from minor to life-threatening and depend, to some extent, on the specific drugs used.

Many of the epidural side effects mentioned below are not improved with low-dose or walking epidurals, because women using these techniques may still receive a substantial total dose of local anesthetic, especially when continuous infusions and/or patient-controlled boluses (single large doses) are used. The addition of opiate drugs in epidurals or CSEs can create further risks for the mother, such as pruritus (itching) and respiratory depression (see below).

The most common side effect of epidurals is a drop in blood pressure. This effect is almost universal, and usually preempted by administering IV fluids before placing an epidural. Even with this “preloading,” episodes of significant low blood pressure (hypotension) occur for up to half of all woman laboring with an epidural,especially in the minutes following the administration of a drug bolus. Hypotension can cause complications ranging from feeling faint to cardiac arrest,37 and can also affect the baby’s blood supply (see below). Hypotension can be treated with more IV fluids and, if severe, with injections of epinephrine (adrenaline).

Epidurals can also cause a rise in temperature in laboring women. Fever over 100.4º F (38º C) during labor is five times more likely overall for women using an epidural; this rise in temperature is more common in women having their first babies, and more marked with prolonged exposure to epidurals. For example, in one study, 7 percent of first-time mothers laboring with an epidural were feverish after six hours, increasing to 36 percent after 18 hours. Maternal fever can have a significant effect on the baby (see below).

Opiate drugs, especially administered as spinals, can sometimes cause unexpected breathing difficulties for the mother, which may come on hours after birth and may progress to have serious effects. One author comments, “Respiratory depression remains one of the most feared and least predictable complications of . . . intrathecal [spinal] opioids.”

Many observational studies have found an association between epidural use and bleeding after birth (postpartum hemorrhage). For example, a large UK study found that women were twice as likely to experience postpartum hemorrhaging when they used an epidural in labor. This may be related to the increase in instrumental births and perineal trauma (causing bleeding), or may reflect some of the hormonal disruptions mentioned above, including increased risks of exposure to synthetic oxytocin.

More serious side effects are rare. If the epidural drugs are inadvertently injected into the bloodstream, local anesthetics can cause toxic effects such as slurred speech, drowsiness, and, at high doses, convulsions. This occurs in around one in 2,800 epidural insertions. Overall, life-threatening reactions occur for around one in 4,000 women. Death associated with an obstetric epidural is very rare, but can be caused by cardiac or respiratory arrest, or by an epidural abscess that develops days or weeks afterward.

Later complications include weakness and numbness in 4 to 18 per 10,000 women, most of which resolve spontaneously within three months. Longer-term or permanent problems can arise from: damage to a nerve during epidural placement; from abscess or hematoma (blood clot), which can compress the spinal cord; and from toxic reactions in the covering of the spinal cord, which can lead to paraplegia.

Side effects for the baby

Some of the most significant and well-documented side effects for the unborn baby (fetus) and newborn derive from effects on the mother. These include, as mentioned above, effects on her hormonal orchestration, blood pressure, and temperature regulation. As well, epidural drugs can cause directly toxic effects to the fetus and newborn, whose drug levels may be even higher than the mother’s drug levels. 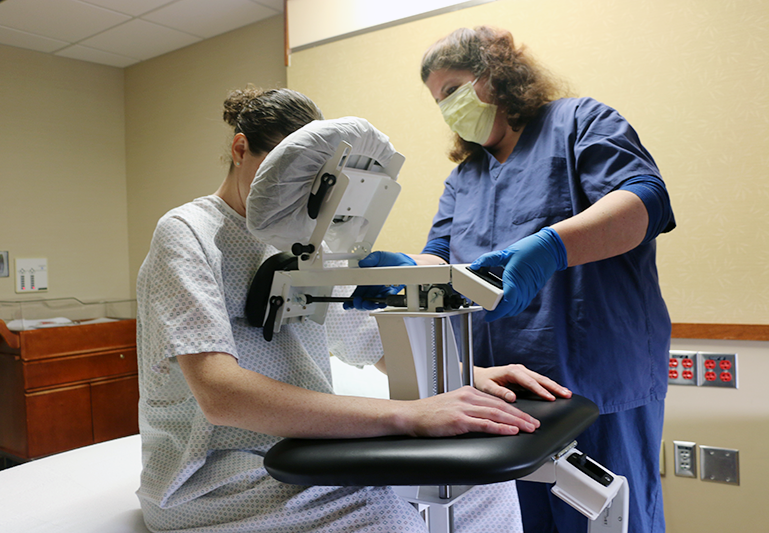 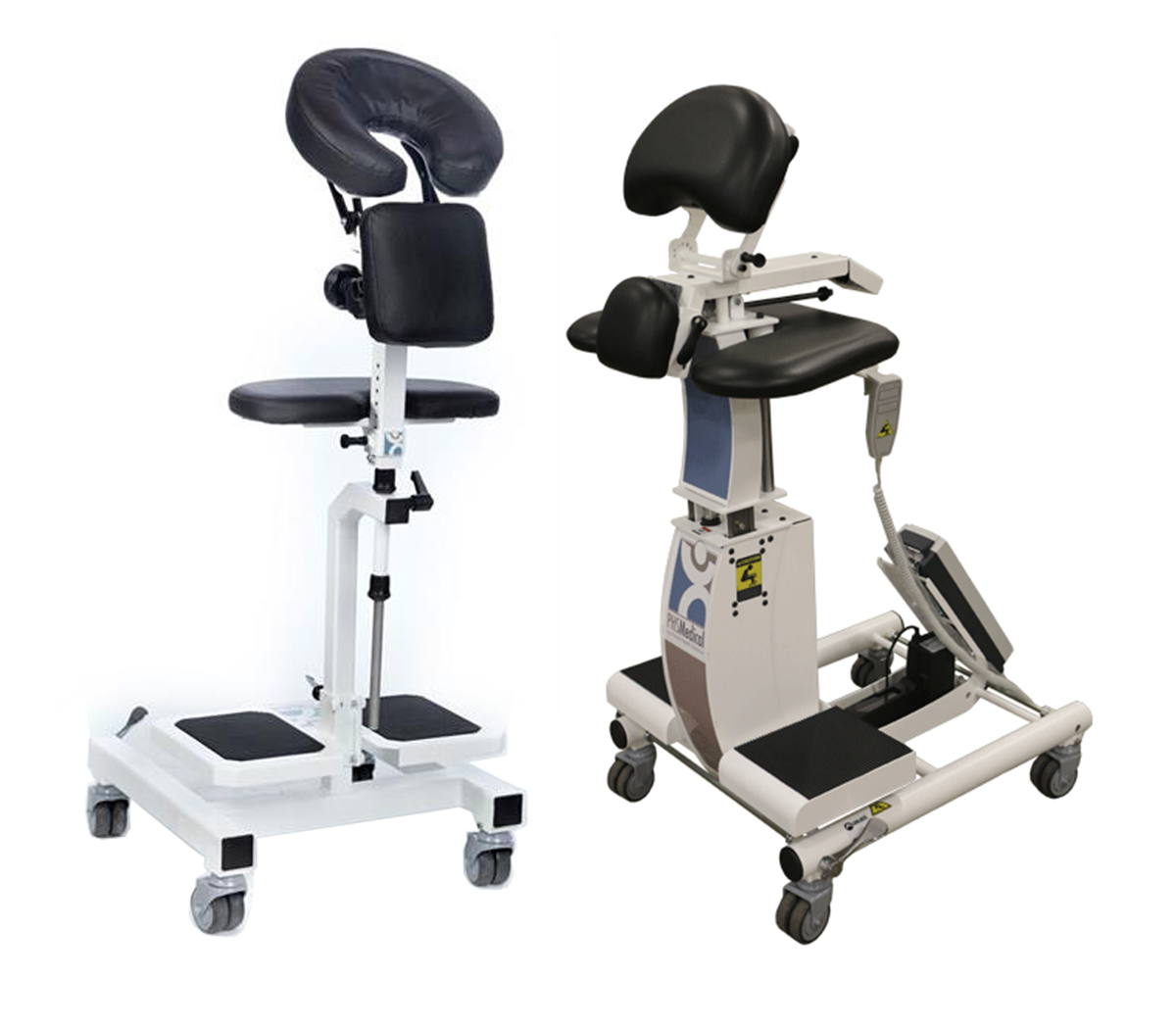 What is the difference between the EPD and E-EPD? November 06, 2018